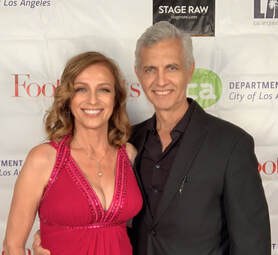 In presenting the award, director/writer/actor/choreographer John Farmanesh-Bocca said, “For me, working with Jack and Jeannine is like working with artistic and spiritual God Parents. There is this unconditional love for the artist, they suffer with you, they believe in you, and that truly makes you want to be better, to live up to their belief. Ultimately, they serve not only the theatre, they know they are pursuing WITH YOU, the BIGGER QUESTIONS of who and why we are; what our ultimate purpose is as humans and connecting to the spiritual in quite literally everything. They are the actors’ friends. They are a Los Angeles Theatre Institution.”

In her acceptance speech, Jeannine Wisnosky Stehlin said: “This is a humbling and really quite unexpected award, and we accept it in the spirit in that we must share it with you, our friends, our family, our theatre family, and the people who come to the theatre to sit in the dark and breathe together and watch life unfold on stage. Thank you for collaborating, and giving to this art. This is also your career achievement award. You earned it. You are earning it.”
Jack Stehlin accepted his award by saying: “I’d like to thank the entire Stage Raw writing staff and community for the show of support and appreciation.”
Stage Raw is a digital journal dedicated to discovering, discussing and honoring L.A.-based arts and culture. Stage Raw was created in response to the decline of arts coverage in local mainstream and alternative media.  Steven Leigh Morris is Stage Raw’s Founder and Publisher.
The Awards ceremony was held Monday, September 9, at Los Angeles Theatre Center in downtown Los Angeles, and was co-hosted by IAMA Theatre Company and Ammunition Theatre Company.

Together at The New American Theatre, Jack Stehlin and Jeannine Wisnosky Stehlin have produced over 100 plays in Los Angeles. three of which later moved to an Off-Broadway run.  In their career, they have worked with and nurtured hundreds of actors and theatre artists.  Plays that received world premieres on The New American Theatre stages have become feature films, short films, and a Lifetime movie event. Several plays have been widely published, and world premiere plays and adaptations have won prestigious awards and accolades.

Jack Stehlin (Actor/Director/Producer) founded The New American Theatre after graduating from the acclaimed Juilliard School In New York.  TV fans might know him best from his SAG Award nominated role as DEA Captain Roy Till on Showtime's Weeds, or from one of his many guest-starring roles on countless hit TV series such as NCIS-Los Angeles, Dark Blue, Without a Trace, Monk, NCIS., ER, NYPD Blue, Buffy the Vampire Slayer, JAG and The Practice. . Films include Wilde Salome opposite Al Pacino.  Jack has been entertaining audiences in both modern plays and the classics, comedy and drama - garnering awards and critical acclaim on the stages of New York, Los Angeles, Regionally, and Internationally.

Jeannine Wisnosky Stehlin is the managing director of The New American Theatre and serves her community as the Chair of the Culver City Cultural Affairs Commission. She has produced over 100 plays in Los Angeles. She made her TV debut as a preschooler on the children’s program Romper Room. She was part of the comedy improv and theatre scene in Chicago before moving to Los Angeles and has appeared in plays in Chicago and Los Angeles.  Jeannine studied at the National Shakespeare Conservatory in New York and earned a B.S. in Advertising from University of Illinois and an M.B.A. in Marketing from Illinois Institute of Technology.
​
About The New American Theatre
Named one of the top-ten 99-seat theatre companies by CBS Los Angeles, The New American Theatre is a creative, artist-helmed membership theatre company.  Throughout its prolific history, NAT has presented more than 100 main stage, second stage, and one act plays, enjoying critical acclaim, awards and nominations from the Los Angeles Times, New York Times, LA Drama Critics Circle, Back Stage, LA Weekly, LA Stage Alliance Ovations, and more. The company’s annual Festival of New One Act Plays, now in its 24th year, accepts submissions from playwrights from all over the world.  Their next productions are the Fall Festival of New One Act Plays and Anton Chekhov’s Uncle Vanya.

NAT seeks to inspire, educate and nurture artists and our community towards a thoughtful and humane world view through the art of story-telling. NAT helps young theatre artists find their voices, cultivate social consciousness and prepare for a lasting career. The company supports new and established playwrights, incubates new plays, and seeks to make a lasting, life-long impression on our community – inspiring the audience to continue provocative conversations long after the curtain closes.