"Easily, one of the best scripted comedies at the 2018 Hollywood Fringe."
"Truly hilariously, and so well directed and performed, Meanwhile, Back at the Super Lair, marvelously exploits every nook and cranny of super hero fandom." - Tracey Paleo, Gia On The Move

"A broad comedy that milks the ridiculous concept for big laughs, this show manages
to make some sharp observations about romance and commitment." - My Haunt Life

Citizens of sate City!   Silver Streak & the human fly are on the tv! 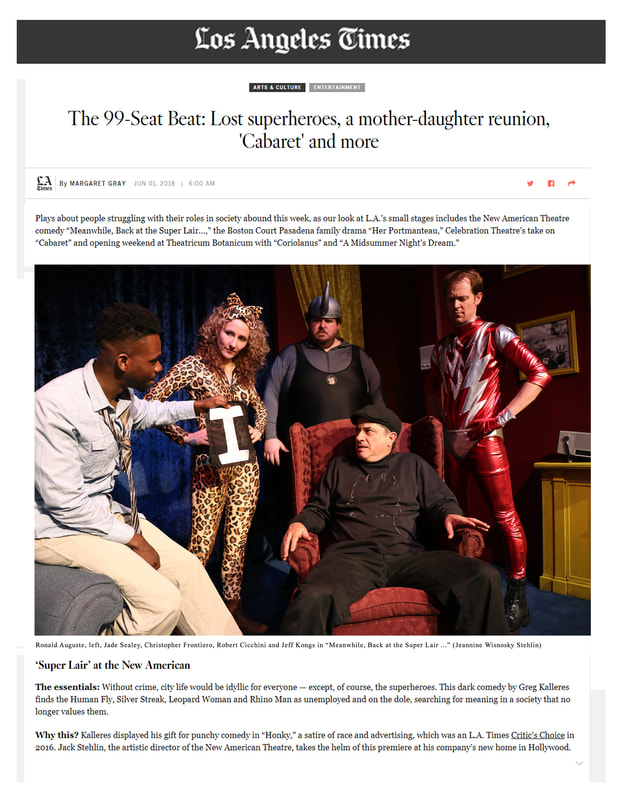 In Meanwhile, Back at the Super Lair…. powerless crimefighters struggle with the meaning of life as they protect a city with no crime. The Human Fly, Silver Streak, Rhino Man and Leopard Woman share a city-funded apartment. But now they're subjected to the investigations of a mayor-appointed efficiency expert, eviction... and brand new super-villain.

“After working tirelessly offstage to get our new venue ready, our company is thrilled to move forward onstage in Greg Kalleres’ play,” says director/artistic director Jack Stehlin. “We’ve presented Greg’s one act plays as part of our annual one act festivals. His work is always sharp and funny, but timely and socially-charged as well.”

This past March 2018, The New American Theatre (a membership company) moved to a two-theatre complex at 1312 N. Wilton Place, between Sunset and Fountain, in the heart of Hollywood. The space was formerly occupied by The Underground Theatre.

Greg Kalleres is a playwright and screenwriter living and working in Brooklyn. Usually next to a large black Labrador with a B-12 deficiency named, Bruce. His satire about race and advertising, HONKY, was an LA Times and NY Times Critics’ Pick, for which he received the Urban Stages Emerging Playwright Award. The play’s critically acclaimed San Diego Rep production aired nationally on PBS for the series OnStage in America. His two-character comedy, A BEAUTIFUL SPELL, was produced at the Royal George in Chicago and later adapted to Arabic and performed to sold-out audiences in Beirut. It was also adapted for podcast with Wondery Media, starring Jenna Elfman. In addition, his play, APROPOS OF NOTHING, recently won the 2018 Reva Shiner Comedy Award at The Bloomington Playwrights Project. Greg received the Certificate of Excellence from the Kennedy Center, is a two-time finalist for Playwrights Program at Juilliard and has won top honors at a number of one-act festivals including Samuel French. Greg has also written and produced commercials for ESPN, Nike, CFDA, Brand Jordan, Budweiser, New York Magazine, Twitter and Google. He was a lead writer on the award-winning “This is SportsCenter” campaign and created ESPN’s Monday Night Football campaign: “Is it Monday Yet?” Greg is currently in development with Fox on his original comedy pilot, DATE WITH DEATH, and Maven Pictures on his original screenplay, OUR CONDOLENCES. Or so he says.

Jack Stehlin (Artistic Director/Director)
Jack Stehlin has directed over 50 plays for The New American Theatre. Fresh out of The Juilliard School, he founded the company (as Circus Theatricals) in 1986. Also an actor, he can regularly be seen on television. His Los Angeles stage roles include New American Theatre productions of Tempest Redux (co-production with Odyssey Theatre), 63 Trillion, More Lies About Jerzy, Julius Caesar, Harm’s Way (LA/Off Broadway), Titus Redux (Not Man Apart co-production at Kirk Douglas Theatre and RadarLA,) and Odyssey/New American Theatre co-productions of Creditors (LA Weekly Award nomination-Best Actor),Taming of the Shrew, The Misanthrope, Macbeth, Richard III, Tartuffe, and True West. On the small screen, he is perhapsbest known on television as DEA captain Roy Till on the Showtime series Weeds (SAG award nomination). New York/Regional stage credits include Salome (with Al Pacino), numerous productions at New York’s Public Theatre including Richard II (with Steven Berkoff), Henry V (with Kevin Kline), Casanova (with Ethan Hawke), Henry IV, (with Mandy Patinkin), and Julius Caesar (with Al Pacino and Martin Sheen). His many guest-starring roles on countless TV fan favorites include the recent Assassination of Gianni Versace, NCIS Los Angeles, Without a Trace, Monk, The Practice, Crossing Jordan, ER, NYPD Blue and Fox’s Hieroglyph. Jack can currently be seen on the big screen in Wilde Salome with Al Pacino.

About The New American Theatre
Named one of the top-ten 99-seat theatre companies by CBS Los Angeles, The New American Theatre is a creative, artist-helmed membership theatre company. Throughout its prolific history, NAT has presented over 200 Main Stage, Second Stage, and One Act plays, enjoying critical acclaim, awards and nominations from the Los Angeles Times, New York Times, LA Drama Critics Circle, Back Stage, LA Weekly, LA Stage Alliance Ovations, and more. The company’s annual Festival of New One Act Plays, now in its 23rd year, accepts submissions from playwrights from all over the world. In 2017, the company launched its full-length plays competition, furthering the company’s commitment to develop and produce New American plays.

NAT seeks to inspire, educate and nurture artists and our community towards a thoughtful and humane world view through the art of story-telling. NAT helps young theatre artists find their voices, cultivate social consciousness and prepare for a lasting career. The company supports new and established playwrights, incubates new plays, and seeks to make a lasting, life-long impression on our community – inspiring the audience to continue provocative conversations long after the curtain closes.

For more information about The New American Theatre, visit NewAmericanTheatre.com


Details for Calendar Listings
“Meanwhile, Back at the Super Lair”

WHAT:
Award-winning theatre company The New American Theatre presents this comedy and the Los Angeles premiere by award-winning playwright Greg Kalleres (Honky). In Meanwhile, Back at the Super Lair…. Powerless crimefighters struggle with the meaning of life as they protect a city with no crime. The Human Fly, Silver Streak, Rhino Man and Leopard Woman share a city-funded apartment. But now they're subjected to the investigations of a mayor-appointed efficiency expert, eviction... and brand new super-villain.